Over the Queen’s Birthday weekend, while Sean was competing at the 29er Nationals, I was in Doves Bay racing with my team, The Elephants, in the first Open Teams Sailing Nationals to be held in about 10 years. 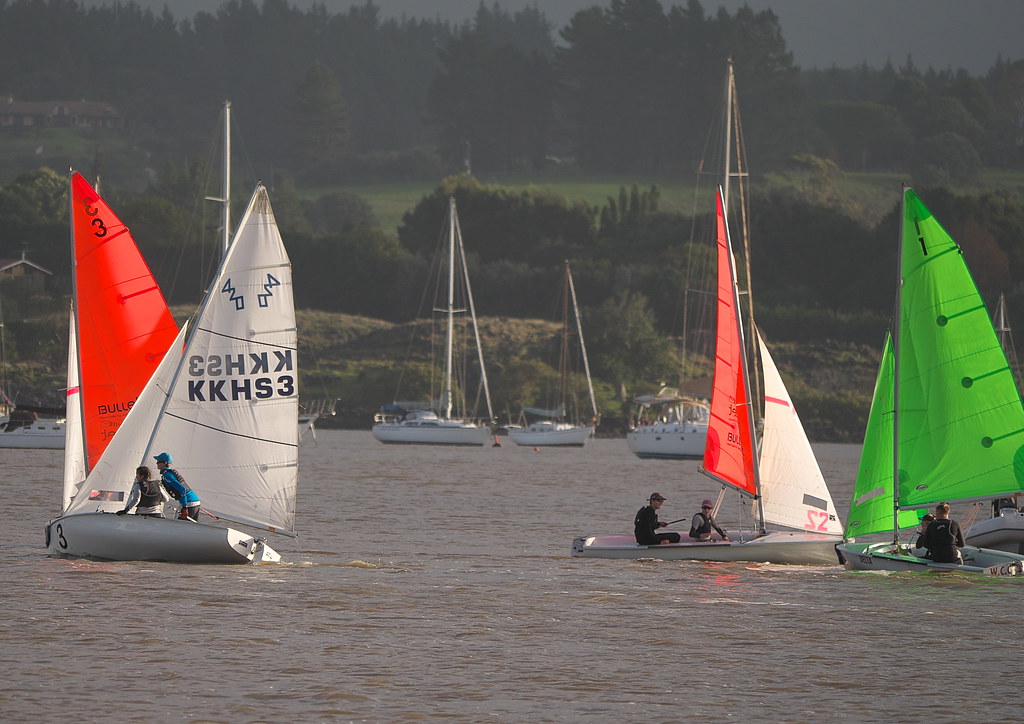 For the restart of the event, it was amazing to have 9 other teams to come up against from across the country. The ‘Open’ title means that anyone of any age can enter provide they with their crew/helm weigh in at 130 kg (or more). Our team came together a little over a week before the regatta and we ended up with a really good team. In our team, we had Tim Snedden from the RNZYS Performance Program (also sails with our Young Guns Team) and crewing George Lee-Rush a top-notch opti sailor; in our second boat we had Greg Dair RNZYS coach, and Serena Woodall from the RNZYS Youth Training Program crewing alongside him; I had Kayla Butler back in from our Wentworth squad crewing for me once again.

The weather running into the regatta was not looking too good. It was forecast was for strong winds and lots of rain, fortunately, the forecasts changed and for the most part the conditions where favourable. Saturday’s racing was cancelled first thing in the morning due to the strong wind and forecasts predicting it to increase with heavy rain. Sunday’s conditions were the polar opposite with racing being postponed until after midday because there was a lack of wind, it did build and with the race committee’s commitment and the good flow of racing we were able to complete a whole round robin (approximately 45 races) just after 5 pm. The Elephants had a fantastic day on the water winning 8 of our 9 races putting us in a tie for 1st with The Kiwis (the Wilson Trophy team)!

It would all come down to the final day. Monday saw a good breeze in the morning which again was forecast to rise throughout the day. With that in mind the RO made the decision to go straight into the finals series between the top 4 teams: Kiwis, Elephants, Thievery, Reach Arounds. We were paired with Thievery for the semi-finals (a first to 3 wins competition) to find who would progress to the final round. We started strong with a good win, but Thievery had improved significantly through Sunday’s racing, they had great speed and were sailing very well which got them the next 3 wins they needed to progress to the finals to versus The Kiwis. So we had to refocus on winning our next races against the Reach Arounds. We won our next races to finish up on the podium in third place.

Thank you to all the teams for a great competition; the race committee and volunteers for a smoothly run regatta; and The Elephants for a   really good result, fabulous team effort, and a lot of fun!